Discuss about all kinds of radio`s sutable for airsoft games.
Post Reply
21 posts

Thinker wrote:121.5 is the big one and its not in the standard range of radios, but this was one of the other (243.0MHz, military emergencies unless Im wrong). My guess is some team got a hold of real Tacbe and used it or tried it, like tacbe be499 have Ch1 243.0 and Ch2 279.45MHz. Heard the chatter without much noice on the scanner.

I have a lot of chatter saved (2500 plus files), have deleted a lot though, and not listed to all yet or organised it all, got a couple of the "sjörapporten" in (swedish searapport), and all without channel info, only sound (unless they discuss it over radio which some do...) Got a lot of it in many different languages, most of which I cant understand, but it helped to tell which teams it might have been on what frequencies. If its russian on one frequency, it probably wasnt norwegian players.

Hade to block out a lot of frequencies, the big antennas on the hill by Nato base probably transmitted a lot of the "non game" I heard, like sjörapporten, and more or less continual transmissions on minicall.

Will see if I can find my notes from the game with different frequencies people used, just realised I didnt save it to my computor, or atleast not in my "Berget 6" folder or where I can find it. Know some used 445, 430.0 and a lot more.

looks like you were in charge of the comms during b6. Can you confirm with me that the Merc repeater did not work? Cos our skilled radio man have tried it several times and it did not work...
I would hate to see the same thing happen at b7, declaring that a repeater is set up and it is actually not...
B4 Rebel Merc CO
B5 Soviet QRF CO
B6 Merc pain in da ass
B7 Orlov's classmate
Top

Norwegian players were NOT on any emergency freq's. All our radioes worked on legal freq's. Our Zodiac net (that does use the same band as swedish emergency services was NOT used or even present at Berget).
Just to make that clear.
And also. Sweden has like norway got a controlling agency for radio freq. If you have a radio net, but you are unsure about the freq use in sweden. Contact them. They might even be able to give you a permit for using your radioes in the given location and time (I know this has been done at games in norway, for non norwegian players).
"go to your God like a soldier!"
Top

Thinker wrote:121.5 is the big one and its not in the standard range of radios, but this was one of the other (243.0MHz, military emergencies unless Im wrong). My guess is some team got a hold of real Tacbe and used it or tried it, like tacbe be499 have Ch1 243.0 and Ch2 279.45MHz. Heard the chatter without much noice on the scanner.

Both are strictly forbidden for non-aircraft-related radio transmissions.

TACBE:
http://en.wikipedia.org/wiki/Tactical_beacon
Quote: "Using it indicates that one is in danger and needs help" 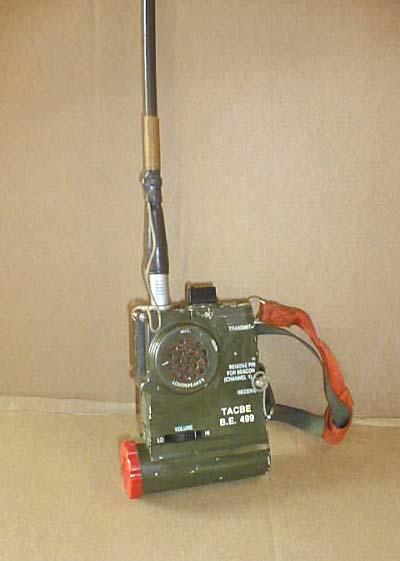 NOTE: If you see a Berget 7 participant with one one the above radios, notify a game marshal immediately and make certain that it will NOT be used ingame under any circumstances. Edit: Unless it's modified to broadcast/receive on the legal PMR frequencies - which must be proved/demonstrated on-site.

The TACBE radios shall only be used by ground troops in a real war scenario for real emergencies and shall NOT be used in an airsoft game under any circumstance.

Quite frankly I get really pissed off if some stupid jerks bring along emergency freq (121,5mhz/243,0mhz) tacbe's on an airsoft game. Tacbe's have limited range and are designed for obtaining emergency contact with overflying friendly forces. The signals may be picked up by sensitive emergency satelites and receivers nearby. This may alert civilian and military emercency agencies. A definite NO GO at Berget games!

I realize that eBay makes it possible to get such hardware, but for the record: Unauthorized usage of 121,5mhz/243,0mhz TACBE on Berget 7 is strictly illegal and may damage Berget-Events for the future. The international emergency satelites can pinpoint 121.5mhz and 243,0mhz signals with very good accuracy. We don't want B7's reputation harmed, do we?


..in many different languages, most of which I cant understand, but it helped to tell which teams it might have been on what frequencies. If its russian on one frequency, it probably wasnt norwegian players.

Guess you both missed a bit of my point with the language, if I hear russian, I dont think its players from norway, I think its russian players. Same with italian, netherlands, danish, german and so on.

I know that radio interested people have bought Tacbes and converted the internals to those from a PMR (info can be found somewhere on the internet). So it works on PMR 1-8 instead. But I dont know if any airsoft team uses that, and that would legally be semi ok (the PMR radio is legal, but youre not allowed modification of it, thats make it unlegal to use unless you have a licens). But using a radio thats on "what ever" frequency is a bad idea.

And using radios you have bought, without knowing the frequency youre on is legal is just stupid.

You can get a permit for a radio via PTS.se, and they alocate frequencies depending on region, so email them with questions. A year license for a low watt mobile radio (4-5W) cost about 400skr, with 100skr for each additional radio. Its 1300skr for 10 radios if you split the cost. But I dont know how they do for specific frequencies and short time duration like Berget events, or the cost.

So even if the radio might be slightly to powerfull for the law, the antenna swapped (isnt allowed on PMR) or similar, its still way better to use the open correct frequencies, with propper radio equipment, than any other.

B6 Mercs repeater was operational. Just dont have a clue where it was, but it was in a bad spot, or something was wrong. Asked crew but they didnt know. Because always when it was tried the signal was worse than direct coms as far as I know, so it was tried from time to time. Never helped. Which is sad, would have been useful. And yes I was in charge of the radio for Mercs, but since noone or very few listen to what I said or arranged, or totally ignored what I said, it didnt really work good. Most took radios as something unimportant, until they needed it and then it was a bit to late, out in the field with platoons that cant talk to each other or the HQ.

But then again. For me its hard to understand that Mercs side most of the game time didnt have a QRF, since you couldnt find players that wanted to do it. When people radio for help and after 15min not even a single group has left since the commanders cant find anyone to send, players just ignored orders, duties and mission (partly due to terrain). Really quite sad when for example the backup sent to General Conrad, the commander for Mercs, is four men (my group left guarding the HQ since noone else could be found).

But back to topic.
This space intentionally left blank
Top

TACBE's rebuilt to legal PMR-frequencies should be OK - but it's rather self-explanatory this must be proved on-site before any usage.

This kind of legal/non-legal equipment dispute leads to the next question:
- As with chronograph test of ingame guns; what about approval of ingame radio equipment with "BE-approved" labels for radios?

That woud be quite useless practice to try and do.

1: BE has a hard time getting chronographing to work and enough manpower for it, not to mention that the people that test sometimes dont really know enough about the mechanics. Apply this problem and it will be worse with radios that is much more technical and require way more for the tester.

2. Most used radio? Programmable radios. If you can choose any frequency you want from example 400-470MHz with a numberpad, you cant really put a sticker on them, the users can still use whatever frequency they want. So it wont practically work.


As I see it, there is only three things bergetevents can do.

1. Information before the game of approved frequencies and settings. This they do.

2. Random checks of player equipment as I suggested before. Drive around in a car, locate a few players heading back to respawn, and on the spot chrono the weapons to verify against pregame test, check armband, check the mags and equipment, a few rule questions, check the radio with a frequency checker and alcohol test. Ask about their thoughts about the game and other things to improve information to the crew about what players thinks, give them "a cookie" for the time and then drive them back to their base, counting as they have respawned. For offenders and people intentionally braking the rules, guess its up to BE to choose what to do. I personally would like to see the crew enforcing a harder line, if its really severe, take the players offgame for the rest of the game. They can leave the gamearea or move their equipment to the safezone and have them stay in "the tent of shame". Ban from future BE events. As I see it, unless people respect crew and know what rule breaking will do, a lot tend to ignore the rules more and more.

3. The last part which require more people and equipment, and I think is hard to do: Have radio scanners in the bases or roaming that can listen and record to find players using unauthorized frequencies, and locate them users.
This space intentionally left blank
Top
Post Reply
21 posts