You know you're an airsofter when

The facts are gentlemen, most all us have a significant other who puts up with us and our crazyness ..... and we are all thankful for that

B7 NATO Foxtrott 2:2 Squad Leader
Keep it slow and silent but when in contact, loud and violent!
Top

Hmmm about 15 points that i can relate with... sniping positions of rooftops... eheheh...

Well about the LADY... yup she's angry about Berget... but she'll get over it.

What girlfriend, whats that?

Heres me with my girlfriend getting cozy: 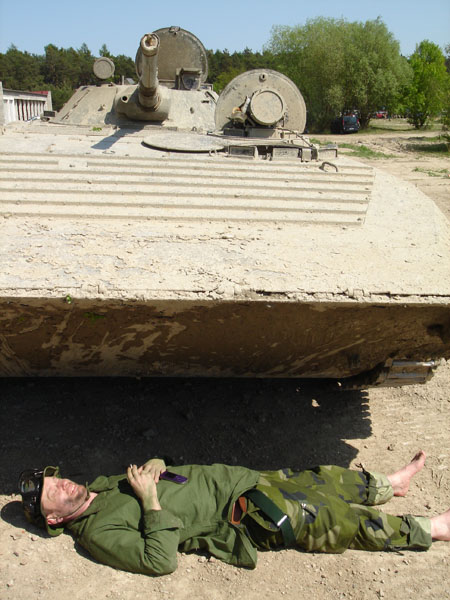 You know when you're an airsofter when:

- When someone asks "How do you spell that?", you spell the word out in the NATO spelling alfabet and your friends consider it normal for you.
- When your 'Airsoft pics' album on facebook is twenty times larger than the 'normal pics' album.
- When your teacher asks you to describe what you've done this weekend (using a certain verb form ofc.), you end up explaining room-clearing tactics in front of the class.
- You wear a MOLLE backpack to school.
- You still have dirt and bb's between the MOLLE webbing on said backpack.
- People don't ask about those 'ribbons' on your backpack, either because you've already told them several times, or have been warned by others not to.
- When your classmates aren't even suprised anymore when you pull yet another item from your pack.
- When everyone in class has a bottle or can on their desk, you have a canteen.
- When you see someone in 'street camo' you can't help but think "you call THAT camo? puh".
- You twitch every time an action movie gets a weapon fact wrong.
- You don't have to imagine these situations when you're typing them ...
B6: NATO
B7: Orlov Corp
B8: Poldavian III Mntrs
B9: Poldavian III Mntrs
BX: Poldavian BRF
BXI: Blood Raven Recon
BXII: Blood Raven CO
BXIII: Cerberus BAT CO
BXIV: UPIR Senior Management
BXV: UPIR HQ resident cripple
BXVI: UPIR old fart
BXVII: GFM HQ
BXVIII: Yes
Top

On the other hand, you know you might have had just a tad too much airsoft when:

-you don't want to be disturbed, so you set up some Claymore mines in front of the door to your room.

-a friend drops by your house unexpectedly and you open the door dressed up in a gillie suit, because you "just happened" to be adjusting it.

-you have to clamber over military surplus equipment to get to your street clothes.
-which, by the way, are olive and tan.

-you have to warn your housemates not to wander into the hallway in the next hour or so, because you are zeroing out your new scope.

-the police have been called to your house at least once, because a neighbour happened to see something very much resembling the members of a terrorist cell going inside and carrying a lot of suspicious looking duffel bags.
-bonus if it actually included some people dressed up with shemaghs.
-extra bonus if the police already know where to go and who they will find there.

-you have a robber break in and instantly run away once every member of the household shows up bearing what look suspiciously like assault rifles.
-bonus if you live in a country where firearms are strictly prohibited and you never even held a real-steel.
-extra bonus if the robber faints.
NATO - the eyes and ears of FOX4
Top

-sometimes you go through your house clearing out room by room, even though no one is home.

-when you answer your door, you may or may not be wearing camo. When asked about it, you shrug and say "Working on my new Airsoft loadout."
Wannabe Berget Player (Too young, see you in 3 years!)
Top

Am I mentally disturbed if I can relate to 25-30 of the original 100 sayings?
Top

No, that means your a airsofter!

Heres a new one: when your driving down the road, you are consteally looking for the best ambush points (I do it all the time)
Wannabe Berget Player (Too young, see you in 3 years!)
Top

KI-Creeper wrote:when your driving down the road, you are consteally looking for the best ambush points (I do it all the time)

I'm starting to accumulate restaurants and flowers, because everyday I speek 7379379397 times about berget...

I love the smell of napalm in the morning, it smells like... Victory!

KI-Creeper wrote:when your driving down the road, you are consteally looking for the best ambush points (I do it all the time)

...might come in handy when i go to Berget....
Wannabe Berget Player (Too young, see you in 3 years!)
Top
Post Reply
37 posts