Maybe a new location would be better. Majority of players know all other locations. From all of them Harnosand its awesome maybe because i love that city and its people, the variation of terrain its great.

Now regarding b8 i understand that its good for mech units having 3/4 roads instead of 1 (this /last year location) but have in mind that 30 victors are fun, but majority of people are walkers, so ... Just a big swamp with thin trees and alot of mosquitos, this is what b8 location tasted for me.

yeah B8 mountaineers hade a "middle of the woods" base but it was good enough for a mil-sim unit.
B8 area is great unless u can get another area with lots of roads.
B5: Allied
B6: Nato
B7: Nato HQ
B8: Poldavian 3rd QRF
B9: Poldavian 5th
B10: Poldavian 15th Sappers
B11: Blood Raven HQ
B12: Yuri Orlov Mercs QRF
B13: Ikaros Mech
B14: NAF Mech
B15: NAF Mech
B16: NAF Mech
B18: GCT Mech
Swedish & Finnish: living/working in Finland
Top

I would vote for harnosand but i think I should have voted for the B8 location.

Damn, that feeling when you where ball deep in a swamp back in B8

A nice area that I would vote for, but a new area is always refreshing and exiting so if it is possible to arrange that then that is what I vote for

Hazardous wrote: A nice area that I would vote for, but a new area is always refreshing and exiting so if it is possible to arrange that then that is what I vote for

This was my first Berget but not the last 'Opa' attends. As I have no comparison I can not vote for a paticular area.
But the next area should have a road specific for offgame vehicles which does not run the entire game area.
This year I saw a lot of off game vehicles on the road next to the PMC base. A lot of those vehicles I saw several times a day which killed any secret mission. I know off game vehicles are off game, but for me it was clear that they still looked and relayed info to their HQ. One particular example at the bordercrossing: a GCT sniperteam lost their spotter when he was shot at the bunker. No problem as this is part of the game. But 5 minutes later a vehicle (offgame) returns from the safezone, passes the bunker, stops 200 meters past the bunker and a lone shooter gets out of the forrest and in to the vehicle.

The most important things about game area for me:

1. good terrain for airsoft skirmishing(not too bushy or open, maybe some elevation changes.)
2. proper setting for the civilians.
3. ingame roads.
4. towns or shops nearby.

If there is any chance to get area from army (Spannsjön Solleftea), take it. If not, take same area as Berget 8. Both areas are very good. Old Berget crew members know that other place what I mean.

Why not test a new area next year, there is a game area placed near the city of "Laxå" that is great!
You have a Airstrip, lake, numbers of roads, ect. 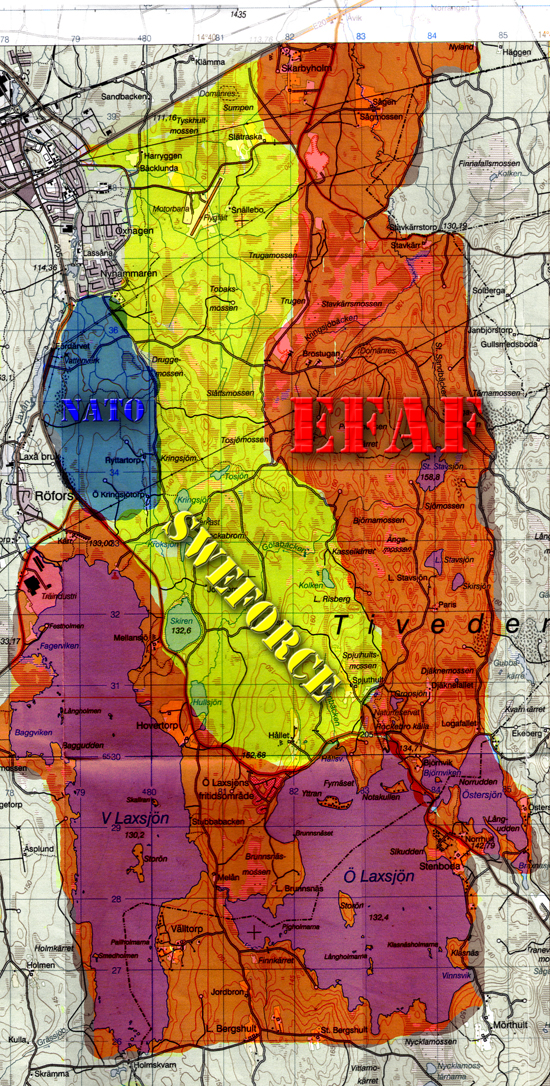 That area looks awesome, but isn't it a bit close to off-game built up areas?
I'm not saying that the international players who attend Berget are worse airsofters than the (mainly) Swedish milsimmers who usually play at Laxå, but with ~1500 airsofters running around, chances are someone might stray from the game area, or off-game hikers or cars will enter the area and disturb the game?

Roads being used by off-game locals was one of my main issues with Härnösand. Awesome battles were put on hold because people were returning from work.

Not to mention what a disaster it would be for the Swedish airsoft community if someone were to have their eye shot out by mistake.

The only time you get close to the civilisation is when you enter the area, or leave.
There are a few houses in the area, but its no bigger problem then mark the map with "Forbidden zone" ect.

In 5 years time we meet civilian 1 time, maybe warning signs on the roads when enter the area would solve that?

Its a very big area, and the most of it is usable with roads all over.

I dont think its possible to find a bigger and better area then this, but please prove me wrong

That area looks awesome, BUT what about that "205" road?
Other than that, i get my RHIB ready right now!